About Spain Transportation
A Spanish airline has become the first carrier to have a plane ticket ‘minted’ on the blockchain. When that first ‘NFTicket’ was auctioned off, it broke a record for the most valuable airline ticket ever sold in the history of commercial aviation – to the tune of over a million dollars!
TravelX, a company building the travel world’s first blockchain-based travel distribution system, partnered with Spain-based airline Air Europa to pioneer a new way of issuing travel tickets – and smashing into the stratosphere of ticket prices in the process.
On April 25, 2022, the two companies’ world-first NFT (Non-Fungible Token) Flight Ticket – or ‘NFTicket’ closed at auction with a value of USD $1,002,000.
At a VIP event at the Eiffel Tower, the final bid for the first-ever NFTicket was revealed (image via TravelX’ Instagram.)
“We see this as a bet on the future, allowing us to apply a layer of service experience that transforms our customer offering,' explained Valentín Lago, CEO of Air Europa on the history-changing occasion.
TravelX is using new technology to reimagine how travel is distributed to travel consumers. Its work in developing the first NFTicket is a step towards using blockchain technology to help “travelers to have a more frictionless experience,” said Juan Pablo Lafosse, co-founder at TravelX.
The companies actually minted 10 NFTickets. The remaining nine will be auctioned off over the coming weeks.

More Than Just a Plane Ticket

TravelX explains what makes an NFTicket so special – beyond the price tag. According to the company, “The NFTicket is the perfect fusion of Art, Travel & Technology.”

An NFTicket is a non-fungible token (NFT) ticket that handles every travel record as an NFT. An NFT is a unique and uncopy-able piece of digital content tied to the blockchain. Blockchain refers to a shared list of encrypted digital records or a ledger that flawlessly and securely tracks transactions.
The blockchain gives security, authenticity, and unchangeability to the ticket. That allows for owners of NFTickets to trade and manage them as verifiable assets.
TravelX worked on a fully carbon-negative blockchain infrastructure to mint the world’s first NFTickets, allaying frequent concerns about the enormous amount of energy often consumed by blockchain technology.

In the case of the Air Europa flight NFTickets, each is also designed by a renowned artist. That brings “meaning and art into what was once a simple flight ticket.”
'We are honored to work with amazing artists, like Carlos Betancourt, to make these first 10 NFTickets even more special and eternally collectible,” said TravelX’ LaFosse.
NFT’s and these NFTickets are compared to digital baseball cards. They have value and collectability beyond their ‘face value’ / purpose. And they can be ‘traded.’ All ‘trades’ or transactions are recorded safely and securely on the blockchain.

When the NFTicket owner is ready to travel, they can present the NFT and a matching ticket is issued in the traditional way.
Each of the first 10 NFTickets contains a digital work of art, flight ticket access to a trip on November 29, 2022 from Madrid to Miami in an exclusive Air Europa business cabin, and the key to unlocking access to a series of unique and exclusive events during MIAMI ART WEEK for its owners.
“But, we know that the excitement and value generated with this first ever NFTicket is also recognition and validation of a real-world application for NFTs. We believe this could become the new standard for the travel industry.'

Another NFT 'First' in Travel

That may have been the first NFTicket, but it's not the first time travel-related NFT's have been auctioned.

(Titled “Norwegian Prima Hull Art,” this NFT reflects the captivating and innovative design created for Norwegian Prima’s stunning hull art. The art piece was designed to be visible from any vantage point, highlighting fluid shapes, with unperceivable beginning and ends, like an ocean. On Norwegian Prima, blue swirls are depicted as freely moving all over the hull, mimicking the undulating movement of water.)
Earlier in April, Norwegian Cruise Line's industry-first NFT art collection sold out in just twenty minutes. The cruise line launched its new, NFT Marketplace, which you can see here at https://nft.ncl.com. Its debut collection was created by the Italian artist who designed the hull art on the cruise line's upcoming new, first-of-its-new-class of ships Norwegian Prima. 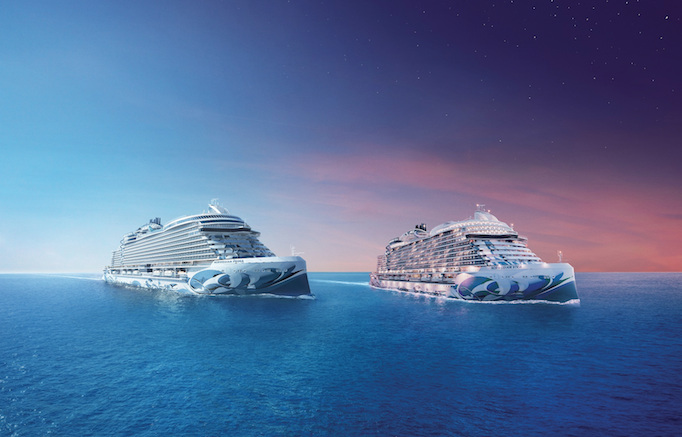 (Renderings of the first two, Prima-class ships for Norwegian Cruise Line: Norwegian Prima and Viva)
All proceeds from the NFT auction and primary sales are being donated to Teach for America, and the winner of the auction was also awarded a place on the Norwegian Prima's inaugural U.S. voyage.

Video: A Day in the Life of a Butler on a Regent Luxury Cruise

Now You Can Get Married in Antarctica